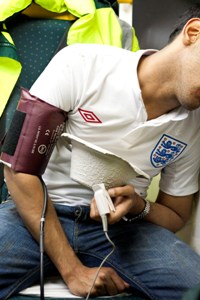 Following England’s final group game of the World Cup, the London Ambulance Service saw a huge increase in demand on the 999 system. From the final whistle on Wednesday until 2am on Thursday morning, the Service saw the number of emergency calls increase by 43 percent.

Meanwhile the Service’s alternative response vehicles or ‘booze buses’ attended 39 patients in central London who’d had too much to drink – the busiest shift since New Year’s Eve.

For staff in the Service’s Waterloo control room the busiest hour was between 10pm and 11pm when demand was up by 65 percent. Staff answered 307 emergency calls compared to an average of 186 calls for the same one-hour period.

The Service is now gearing up for the last 16 clash with Germany on Sunday afternoon and is urging people to use their ambulance service wisely.

Deputy Director of Operations Jason Killens said: “We’ve seen very big rises in demand in the hours after all of England’s matches at the World Cup – particularly following Wednesday’s game against Slovenia. And a lot of that extra demand is simply because people are drinking too much.

“We’re now expecting a very busy Sunday afternoon after the game with Germany. I’d urge everyone to enjoy the match, but people should be sensible. Take care in the sun, eat before drinking, and remember to take on plenty of water and soft drinks.

“Please don’t overdo it and end up needing our help. It’s vital that our staff are free to respond to patients who really need us – those people with serious or life-threatening illnesses or injuries. Every minute we spend looking after someone who’s had too much to drink is a minute that could have been spent helping someone where every second really does count.”

Anyone with a more minor illness or injury – or who wakes up after the big game a little worse for wear – is being asked to consider other healthcare options including:

To help deal with the increase in demand during the World Cup, the Service has a number of initiatives in place including: