The London Ambulance Service recently recognised exceptional members of staff during a special ceremony, which was attended by 250 people including former patients. 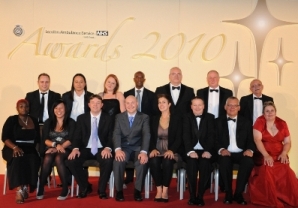 and commitment, having been selected from 170 nominations, made by their colleagues.

Several recent patients of the Service were among those who were invited to attend the ceremony, held at the Grand Connaught Rooms, Covent Garden. They presented framed certificates to the winners and to those who had been highly commended and many were also reunited with the crews who treated them.

Chairman Richard Hunt, who compered the evening, said: “The standard of the nominations was extremely high and demonstrates what talented and dedicated staff we have working for us – it makes me extremely proud to be part of the London Ambulance Service.”

A raffle held during the evening raised over £1,000 for the Chief Executive’s nominated charity – MERU – a small charity which designs and creates custom-made equipment for disabled children and young people.