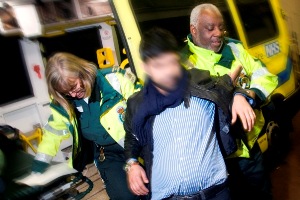 As the capital gets ready to embrace World Cup fever, the London Ambulance Service is urging people to stay safe during a summer of football.

A combination of sun, high temperatures and too much alcohol can mean an increase in 999 calls into the Service’s control room – particularly following big England games.

When England played Portugal in the World Cup quarter finals in 2006, call volume increased by 44 per cent in the first hour after the match. And following the England v France clash in Euro 2004, call rates rose by almost 100 per cent.

“People should enjoy the World Cup, whoever they’re supporting, but they should be sensible. I’d urge people to not to drink too much if they’re out watching the football, to eat before drinking and to have plenty of water or soft drinks. And if it’s hot and sunny remember to keep cool and use plenty of sunscreen.

“Anyone with a more minor illness or injury – or who wakes up after a big game a little worse for wear – should think about using other healthcare options, such as their local pharmacist or NHS walk-in centre, or call NHS Direct on 0845 46 47. Or if people need to go to hospital for non-emergency treatment, they should consider making their own way there – going in an ambulance does not mean you will get seen any quicker.”

A range of inititives are in place to deal with the expected increase in 999 calls during the World Cup, including: