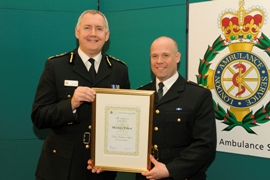 A ceremony has been held to honour London Ambulance Service staff who have recently achieved 20 years’ service, those retiring from duty and one member of staff who went above and beyond the call of duty.

Members of frontline and support staff attended the event in Westminster on 23 February for the presentation of their certificates and medals.

Fourteen retirees from across the Service received glass plaques, bells and a certificate.

Chief Executive Peter Bradley, who presented the awards, said: “All the staff receiving recognition here have shown great dedication and commitment, whether it is in reaching 20 years’ Service or the end of their career with us. It is this dedication that makes us the Service we are today and I’m very proud of that.”

Tower Hamlets Duty Station Officer Martyn Tillett was awarded the Chief Ambulance Officer’s Commendation at the ceremony for his bravery and courage in protecting a member of the public from a violent attack.

In November 2009, Martyn was travelling back to station at the end of his shift when he saw a woman being attacked by a man in Whitechapel. Martyn quickly stepped in and pulled the man away; restraining him, despite the man becoming more violent and aggressive, until colleagues and the police arrived.

The man was arrested and one week later ordered to pay an £850 fine by Thames Magistrates’ Court and £350 for damage to the ambulance car caused during the struggle.

Chief Executive Peter Bradley said: “Martyn acted bravely and selflessly to protect a member of the public, and it makes me very proud to present him this award.”