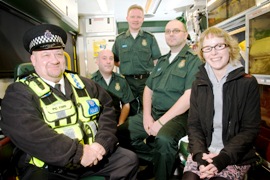 Londoners whose hearts stop beating in public are over six times more likely to survive than ten years ago, new figures from the London Ambulance Service reveal.

Just under one in six people (15.2 per cent*) who suffered an out-of-hospital bystander-witnessed cardiac arrest were discharged from hospital alive last year, compared to 2.5 per cent in 1998/99.

The news comes from the London Ambulance Service 2008/09 Cardiac Arrest Annual Report and the increased survival rate reflects a wide range of developments in the care and treatment of cardiac patients in the capital.

Clinical Practice Manager Mark Whitbread said: “When someone’s heart stops beating every second is vital, and to have seen such tremendous improvements in these survival rates is a great achievement.

“Many factors have contributed to the improved cardiac arrest survival rate, which include our staff reaching patients in a life-threatening condition faster than ever before and giving a high quality of care on scene.

“The most important thing to remember is that if you see someone collapse and stop breathing you need to call 999 for an ambulance as quickly as possible and begin chest compressions while the ambulance is on the way. This will give the patient the best chance of survival.”

Last year the Service community resuscitation team trained over 10,000 members of the public in basic life support, which includes delivering cardiopulmonary resuscitation (CPR), or chest compressions and rescue breaths, a lifesaving technique that doubles a cardiac arrest patient’s survival if performed while emergency help is on the way.

With the help of Big Lottery funding and the British Heart Foundation, the Service is now responsible for almost 500 automated external defibrillators (AEDs) – machines that can deliver a shock to restart a patient’s heart – in public places such as railway stations and shopping centres. Last year the Service trained over 1,200 staff in these public places to use a defibrillator.

*The cardiac arrest survival figure is calculated using the internationally-recognised Utstein method. The calculation takes into account the number of patients discharged alive from hospital who had resuscitation attempted following a cardiac arrest of presumed cardiac aetiology, and who also had their arrest witnessed by a bystander and an initial cardiac rhythm of ventricular fibrillation or ventricular tachycardia.

Twenty-eight-year-old Mary Cook from south London was walking along Tooley Street, London Bridge, one evening in May this year when she collapsed and stopped breathing. She had suffered a cardiac arrest.

British Transport Police Constable Noel Harmsworth was passing by with a colleague. He said: “I could see Mary lying on the floor turning blue and I knew she needed help. Someone had already called 999 for an ambulance, so I immediately started chest compressions.”

Paul said: “Noel was giving CPR to Mary for about five minutes before our arrival, which effectively keeps a patient alive while advanced medical assistance is on the way.

“We attached a defibrillator, gave Mary’s heart two shocks and it started beating again. Patients in cardiac arrest need treatment with a defibrillator as soon as possible for the best chance of survival.”

Alan and Paul took Mary to St Thomas Hospital where she underwent a bypass operation. After eight weeks Mary was discharged home. She is now back working as a web designer and is moving abroad to continue her career in Germany this month.

Mary, who lives on New Park Road, Brixton, said: “I don’t remember anything for a week before the incident until waking up in hospital. It’s great to meet Alan and Paul again and say ‘thank you’. Without the help of them, the police officers and the passer by calling 999 so quickly, I’d be dead by now.”