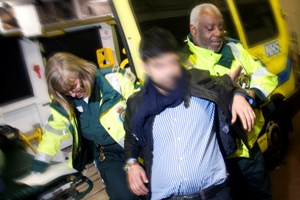 Demand on the London Ambulance Service is expected to soar on Friday (18 December) when festive revellers brave the cold to pack the city’s pubs, bars and clubs for the office party night.

The equivalent night in 2008 saw the Service take 1,731 emergency calls between the 8pm and 3am – almost a 10 per cent increase on the previous three Friday nights that December, with that trend expected to continue this year.

Deputy Director of Operations Jason Killens said: “This time of year is always very busy for us and there will be a lot of office parties taking place this week which will no doubt lead to a further increase in demand – especially with calls relating to alcohol.

“I’d urge people to wrap up warm this weekend and not to drink too much. People out and about in London should take extra care of themselves and their friends.

“Anyone with a more minor illness or injury – or who wakes up on Saturday feeling a little worse for wear – should think about using other healthcare options, such as their local pharmacist or NHS walk-in centre, or call NHS Direct on 0845 46 47. Or if people need to go to hospital for non-emergency treatment, they should consider making their own way there – going in an ambulance does not mean you will get seen any quicker.”

The Service has already seen a rise in 999 calls this December, responding to 1,589 calls last Friday (11 December) between 8pm and 3am. That’s an increase of almost 11 per cent on the final Friday in November – before party season got underway.

A range of initiatives are in place to deal with the festive demand, including:

The booze buses and treatment centre are vital in easing demand on the Service at its busiest time of the year. However, there are a number of things that people can do to help themselves:

Plan your journey home: Don’t leave it to chance – think about how you’re going to get home, and who with, before you go out.
Keep an eye on your friends – make sure that no one gets left behind, as these are the people who we can often be called to help
Wrap up warm to keep the cold at bay