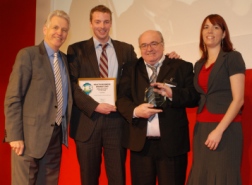 The London Ambulance Service has won the ‘Ambulance trust of the year’ prize at the Health Business Awards 2009.

The Service beat four other finalists to scoop the accolade at the event held at the Emirates Stadium in north London yesterday, presented by BBC journalist Nicholas Owen.

The ability to respond to almost 974,000 incidents in the last year, despite high congestion levels in the capital, was among the reasons cited for recognising the Service.

Initiatives the Service has introduced to ensure that patients dialling 999 and categorised as being in a non life-threatening condition receive the best possible level of care were also mentioned.

In a survey carried out by the Care Quality Commission, 99 per cent of respondents had trust and confidence in the staff who had attended them, and 97 per cent said that they had received a good, very good or excellent level of care.

Performance Improvement Manager Paul Webster, who accepted the award on behalf of the Service, said: “It’s an honour to be here representing the Service and receiving this award. It’s great that the hard work of all staff in the Service has been recognised in this way.”