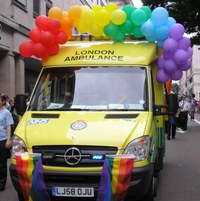 An ambulance decorated with brightly-coloured balloons was led through central London on the two-mile route.

Thousands of spectators lined the streets for the parade which began at Baker Street and finished at Trafalgar Square.

Senior Resource Coordinator Heidi Rapley said: “The crowd were fantastic and we were so well-received. It was the first year I’ve been involved and I can’t wait for next year now.”