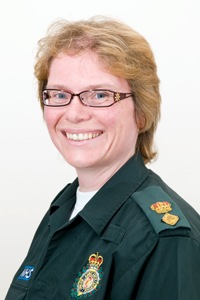 The London Ambulance Service has announced the appointment of a new operations manager for the boroughs of Lambeth and Southwark.

Steph Adams, aged 39, will be responsible for the delivery of ambulance services to patients in the two boroughs and will be based at Oval station on Foxley Road. She’ll also manage staff at the Service’s station in Brixton.

Ms Adams, who has been with the Service for 15 years, previously managed at the Barnehurst complex, encompassing the boroughs of Bexley and Bromley.

She will be supported by a management team comprising duty station officers, a training officer and team leaders in her new position.

Steph – who has lived in south London all her life – said: “Lambeth and Southwark are both hugely diverse areas and I’m looking forward to the new challenge. There’s a lot of change planned for the ambulance service over the next few years and we’re recruiting hundreds of new staff to our three-year student paramedic programme. The stations I’m responsible for will be getting an extra 30 staff so that’s great news for people in the area.

“My top priority is to deliver high quality patient care to the people of Lambeth and Southwark. It’s also important that people recognise that hospital isn’t always the best place for them and it’s my job to help identify different care pathways like GP services and walk-in centres.”

Ambulance staff in the area responded to over 27 thousand incidents during the 2008/09 financial year and Steph said: “We’ve been extremely busy over the last year and I would urge people who are not seriously ill or injured to use their ambulance service wisely and consider other ways of getting help before dialling 999. Arriving in an ambulance at an A&E department does not mean you will be seen more quickly by hospital staff.”