A paramedic has been attacked after he disturbed thieves trying to steal drugs from an ambulance station.

The paramedic was hit over the head with a fire extinguisher, punched and kicked during the burglary at Pinner Ambulance Station, Harrow. 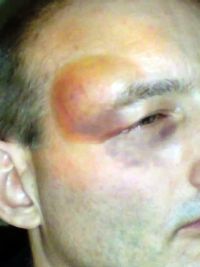 Police are now searching for four men in connection with the assault which happened at approximately 1:30am on Saturday (14 March).

The staff member, who is a team leader at the station, does not wish to be named. He said: “I was on my break at the station and as I walked into the garage four men sprung up from behind one of the cars and just came at me.

“They ran straight at me, throwing punches and kicking me as I tried to fend them off. Then I felt an almighty thump on the back of my head from a fire extinguisher. I was dazed and was stumbling around which gave the men the chance to run away.

“The whole thing lasted not more than two minutes, it was all over before I knew it.

“Afterwards, I was fuming. Then I found a slash on my forearm and saw the slit through my shirt with a wound on my stomach – it transpired later that a knife with blood on it was found outside the station – I realised then how lucky I had been.

“When you are at your ambulance station you just don’t expect anything like this to happen. I’ve been doing this job for 19 years and have never been assaulted like this.”

Following the attack the paramedic was taken to Northwick Park hospital for a check-up.

Ambulance Operations Manager for Pinner Sean Brinicombe said: “We are doing everything we can to support him through this and to aid the police in pursuing a prosecution.

“I am shocked that people would sink so low as to steal from an ambulance station and attack a paramedic in the process.

“Thankfully he is okay, but this incident could have been a lot worse. Our staff shouldn’t have to work in fear of attack, especially from the very community they are trying to serve.”